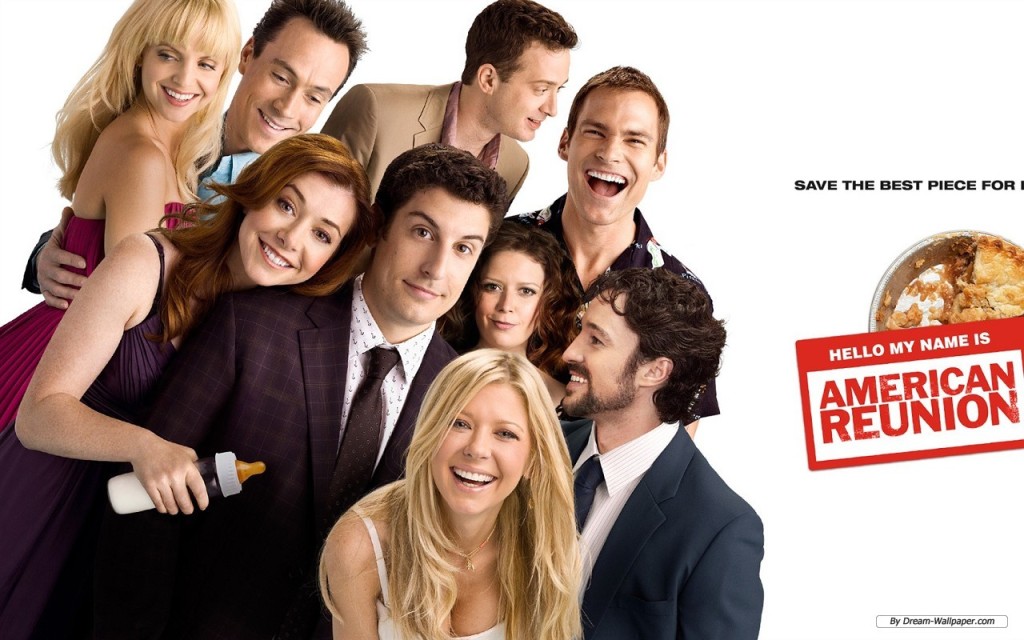 The American Pie gang is back again for one more time.   Everyone is back for the reunion and in case you have missed it here is a review for the movie.

It’s been some time since we saw Jim embarrass himself in front of the world and what better time than for a reunion.  Jim and his band camp lover Michelle are now married and have their first little one and it’s time for their high school’s thirteen year reunion.  Everyone from East Great Falls High School will be in attendance to celebrate but how will everyone react when old acquaintances are reunited?

Good old Kevin reaches out to Jim as he has now become married and now looking to go to the reunion.  Kevin wants all the guys to meet up a few days before the reunion to catch up with the guys including Oz who has become a celebrity and Finch who has his own story.  However no invite is reached out to Stiffler.

Stiffler is still close to Great Falls working for a guy that has made Stiffler his own little assistant.  Stiffler is making a good living but is not exactly the boss as he wish he was and more of a pea on for the boss that uses Stiffler for all that he is worth.  Unknown to Stiffler there is a reunion coming to town and when he spots the guys at the local drinking hole ,what better time to get back to his old Stiffler ways?  The ways of the Stiffmeister.

Jim is using this reunion as a way to not only catch up with the guys, but also spark the romance back with Michele who both of them have fallen on hard times with a new baby in the house.  You all know how crazy kinky these two are and lately their X rated love life has been rated down to a PG rating with little or no adult content.   Both are sexually frustrated and this usually is a bad sign for Jim as you know his sexual frustration usually turns out the local authorities and every you tube channel on the internet.

Perhaps what is most interesting in this movie is the fact that nearly everyone from the fist American Pie have returned and all bring their little stories along the way.  Oz spots his old  romantic encounter Heather,  Kevin runs into good old Vicky, while Finch has finally given up on older woman, specifically Stiffler’s Mom,  and has now found a new fling at the reunion who he is sharing all his latest adventures.

Lastly we cannot forget Jim’s father who has become a staple in the American Pie franchise.  Jim’s Dad is now living by himself as his wife has now passed away for some time now.  He is very happy to see his son and grandson but Jim’s father is starting to worry Jim.  Jim thinks it’s time to get his dad back on the dating game and so Jim helps his dad with some online dating profiles.  Interesting and ironic how son is now trying to help father in his sexual conquests?

All in all don’t want to share too much as there is a lot in this movie to cover.  Everyone is indeed back again the guys are all good, but has Stiffler just over done his welcome one last time?  The guys might just finally say what needs to be said and will old flames be reunited at the reunion.  While Jim and Michele might be in trouble as Jim has indeed done it again, when his sexual frustration carry’s over with someone from Jim’s past.  Could it be Nadia? Guess you need to figure that one out for yourself?

Overall the movie was really good and I give it a notch up over the last “American Wedding” and give it four stars.  It was very funny and not to spoil it for everyone, but the end of this movie could mean more to come perhaps in the future of the American Pie cast.  Stiffler was at his best, Jim’s Dad was hilarious and all the surprises on the way were all a good mix.  After seeing this latest American Reunion I would return for more fun in the future.

See more at the site. View all posts by kchofmannsuperdad